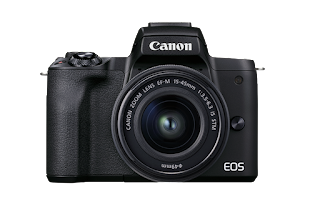 Canon has announced the launch of the EOS M50 Mark II. This small, compact APS-C sensor mirrorless camera offers a few minor upgrades to the original M50, most notably improvements to the Eye detection autofocus feature and a few video-based tweaks.

While the camera has been announced in the USA – where the M50 has been one of the topselling cameras – and in Asian regions – where, similarly, the M50 has been incredibly popular – there are no plans at present to sell it in the UK or other European regions.

Of the launch, Canon UK commented, "Canon has today (14th October 2020) announced the launch of the EOS M50 Mark II in some international regions. This is the successor to the award-winning EOS M50 mirrorless camera. At this stage we are unable to confirm if and when this camera will launch in EMEA [Europe, Middle East and Africa]."

To find out more about the EOS M50 Mark II, visit the Canon EOS camera system section via eos-magazine.com.

April 29, 2020
Canon has developed EOS Webcam Utility software to bring easy-to-use, plug and play, webcam-like functionality to selected Canon cameras (see below for full list of compatible EOS models). This allows you to use your camera as a high-quality webcam for personal or business video calls.

The free software is currently Beta, which means that Canon welcomes feedback about bugs and suggestions for additional features. Also, it can only be used with Windows 10 64-bit at present, though compatibility with other computer operating systems is likely in the future.
UPDATE 28 May 2020
EOS Webcam Utility Beta is now also available for Mac OS – 10.13 (High Sierra), 10.14 (Mojave) and 10.15 (Catalina).

Details about compatible cameras and download instructions are available at:
https://shop.usa.canon.com/estore/marketing/ebook/Canon-WebCam-Utility-Instructions-with-USB.pdf

The EOS R5 offers a step-change in performance, with an incredible 12fps (frames per second) using the mechanical shutter, whilst the electronic shutter offers 20fps. The camera’s combination of speed and resolution will set new standards, to make mirrorless an ideal choice for everyone from wedding to wildlife photographers.

Canon’s outstanding optical image stabilisation technology and superior electronic communication between lens and camera shines with this latest addition to the EOS R family. The EOS R5 takes the cutting-edge technology developed for the range to the next level, by including a newly Canon-developed, in-camera image stabilisation system – which works in combination wit…
Read more