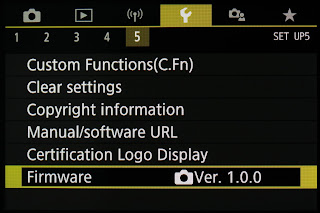 Firmware is available for the following cameras:

Updates for other affected Canon EOS cameras are expected to be released in due course.

These follow the firmware update already released for the EOS 80D DSLR camera.

Ensure that you read the instructions contained within the downloaded firmware update from the Canon UK website. For more information on how to install firmware, read the EOS magazine article.