EOS M2 previewed – but only for Japan 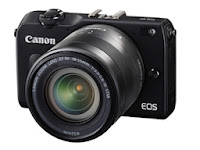 A news release on the Canon Japan website gives a preview of the forthcoming EOS M2 camera. The M-series are mirrorless models - though Canon prefers the term CSC (compact system cameras).
The release date is given as mid-December 2013, but we understand this is for Japan only. There is no indication if or when the camera will be available elsewhere.

Update 4 December 2013: Canon UK says that it is not planned to introduce the EOS M2 in Europe at the moment, but distribution and demand will be constantly reviewed and the situation may change in the future.