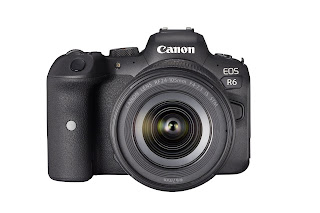 Canon has released firmware version 1.1.1 for the EOS R6 camera which incorporates the following fixes and enhancements:

1. A messaging is displayed when [HDMI display: Camera+External monitor] and [Overheat control: on] settings are both enabled.

3. Fixes a phenomenon in which the IS capabilities may be degraded when performing continuous shooting in cases where the RF 100-500mm f4.5-7.1L IS USM lens is attached to the EOS R6 running firmware version 1.1.0.

4. When using certain RF lenses for movie shooting, the in-lens image stabilisation mechanism has been improved.

5. Fixes a phenomenon in which the "Slow Synchro" setting screen is not accurately displayed, when the language is set to English.

6. Fixes a typo displayed on the communication setting screen, when the language is set to Korean.

7. Connectivity during FTP transmission has been improved.

8. Temperature detection and shooting time control in video shooting have been improved. In addition, the total shooting time when the short-time recording and power-on/off are performed repeatedly at room temperature is improved.

9. The phenomenon in which the movie recording time available is not correctly displayed when the Date/Time/Zone is not set has been corrected.

You can download the firmware update from the Canon UK support site.

This firmware update is for cameras equipped with firmware version 1.1.0. If the camera's firmware is already Version 1.1.1, this update is unnecessary. When updating the firmware of your camera, please first review the instructions thoroughly.

April 29, 2020
Canon has developed EOS Webcam Utility software to bring easy-to-use, plug and play, webcam-like functionality to selected Canon cameras (see below for full list of compatible EOS models). This allows you to use your camera as a high-quality webcam for personal or business video calls.

The free software is currently Beta, which means that Canon welcomes feedback about bugs and suggestions for additional features. Also, it can only be used with Windows 10 64-bit at present, though compatibility with other computer operating systems is likely in the future.
UPDATE 28 May 2020
EOS Webcam Utility Beta is now also available for Mac OS – 10.13 (High Sierra), 10.14 (Mojave) and 10.15 (Catalina).

Details about compatible cameras and download instructions are available at:
https://shop.usa.canon.com/estore/marketing/ebook/Canon-WebCam-Utility-Instructions-with-USB.pdf

The EOS R5 offers a step-change in performance, with an incredible 12fps (frames per second) using the mechanical shutter, whilst the electronic shutter offers 20fps. The camera’s combination of speed and resolution will set new standards, to make mirrorless an ideal choice for everyone from wedding to wildlife photographers.

Canon’s outstanding optical image stabilisation technology and superior electronic communication between lens and camera shines with this latest addition to the EOS R family. The EOS R5 takes the cutting-edge technology developed for the range to the next level, by including a newly Canon-developed, in-camera image stabilisation system – which works in combination wit…
Read more