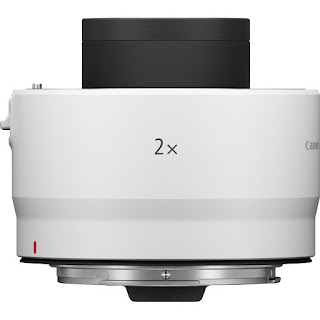 Built specifically to match the optical excellence of compatible RF lenses, these two new Extenders increase the focal length of the attached lens. Both Extenders use advanced high-refraction, low-dispersion glass to control curvature of field and chromatic aberration of magnification. They also feature a lens coating and three-layer combined lens to reduce ghosting.
They're also designed to work in extremes – with heat shield coating to prevent performance deterioration in high temperatures and weather sealing for wet and dusty environments (when used with a compatible L-series RF lens).
At launch the two Extenders are compatible with the RF 100-500mm f4.5-7.1L IS USM lens (from 300mm upwards), as well as the RF 600mm and 800mm f11 super telephoto lenses.
The RF Extenders will be available later in 2020 with the following RSPs:
Extender RF 1.4x – £559.99 – find out more
Extender RF 2x – £699.99 – find out more

March 13, 2020
Exactly a month since its development announcement of the EOS R5 – a full frame mirrorless camera built on the revolutionary EOS R system – Canon Inc. reveals additional information. Achieving the ‘impossible’, Canon Inc. confirms the EOS R5’s video capabilities will far exceed that of competing cameras on the market. With its ability to internally record 8K using the full width of the sensor at up to 30p, the latest Canon EOS R camera is set to redefine mirrorless with its market-leading features. In addition, in all 8K modes it will support Canon’s renowned Dual Pixel CMOS AF. Canon Inc. also confirms the EOS R5 supports advanced animal AF – recognising dogs, cats and birds, relying not only on the eyes of the animal, but also the face and body for situations when the eyes are not visible. Richard Shepherd, Pro Product Marketing Senior Manager, said: “We’ve seen speculation that the EOS R5’s specs are ‘impossible’. Today’s announcement confirms once again, we are achieving the ‘imp
Read more

October 25, 2020
Firmware version 1.3.0 for the EOS 5D Mark IV incorporates the following enhancements and fix: 1. Enables NFC connection with smartphones running Android 10 operating system.   *For Android running v6.0 or later, use Camera Connect v2.7.10 or later. *For Android running v5.0 or older, use a connection method other than NFC.   2. Enables support for the .CR2 image file format on image.canon. 3. Fixes a phenomenon in which some camera operations may not be possible or an error may occur after an insufficient flash output is produced when shooting with the flash. The firmware update can be downloaded here.
Read more

April 29, 2020
Canon has developed EOS Webcam Utility software to bring easy-to-use, plug and play, webcam-like functionality to selected Canon cameras (see below for full list of compatible EOS models). This allows you to use your camera as a high-quality webcam for personal or business video calls. The free software is currently Beta, which means that Canon welcomes feedback about bugs and suggestions for additional features. Also, it can only be used with Windows 10 64-bit at present, though compatibility with other computer operating systems is likely in the future. UPDATE 28 May 2020 EOS Webcam Utility Beta is now also available for Mac OS – 10.13 (High Sierra), 10.14 (Mojave) and 10.15 (Catalina). Details about compatible cameras and download instructions are available at: https://shop.usa.canon.com/estore/marketing/ebook/Canon-WebCam-Utility-Instructions-with-USB.pdf The software download can be access here: https://www.usa.canon.com/internet/portal/us/home/support/self-help-center/e
Read more