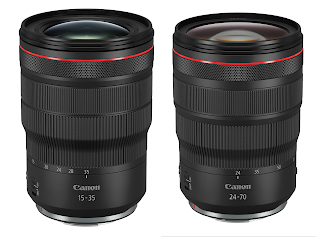 Canon unveils the first two of its trinity RF F2.8L lenses, expanding the pioneering RF lens line-up for the EOS R System. Honouring its commitment to release six new RF lenses in 2019, the RF 15-35mm F2.8L IS USM and RF 24-70mm F2.8L IS USM will be available from September 2019 onwards.

Firmware update
To complement the introduction of these lenses, Canon is releasing firmware updates for the EOS R and EOS RP which further enhances the Eye detection AF performance of both mirrorless cameras. The update enables the camera to detect and focus on the eyes of subjects at much great distances compared to the previous firmware, as well as offering faster acquisition and improved accuracy and tracking. In addition to this, listening to Canon’s customer feedback, firmware engineers have simplified the AF Eye Tracking indicators and improved the indicators refresh rate on both the EOS R and EOS RP. The update will be available for public download before the end of September.

The lenses are the first wide angle L-series lenses to feature Canon’s 5-stop Image Stabilizer (IS). The Dual sensing IS and Combination IS improves the IS shake detection capabilities of the lenses, as well as automatically detecting when used on a tripod to turn off the IS system.

They are also Canon’s first fast aperture zoom lenses to include Nano USM technology. Originally introduced in the EF-S 18-135mm f/3.5-5.6 IS USM, Nano USM lenses use a motor system that delivers high speed focusing for photography, as well as continuous smooth, virtually silent focusing for video recording. The RF 24-70mm F2.8L IS USM, like the RF 24-105mm F4L IS USM, features a focus breathing suppression system which prevents the angle of view changing when focusing – producing a natural look when focusing during filming.